One of the talks I attended at clicker expo was from Ken Ramirez on what to do when your dog makes an error and doesn't respond as you wished.  This is a subject of great interest to me because that is an area that I have struggled with as I have transitioned from the more "traditional" training methods.   There is a "heirarchy of effective procedures" designed by Susan Freidman which outlines the steps that should be taken before punishment techniques are considered.  This is a link to heirarchy article with examples of each level.

Ken Ramirez discussed different techniques on how to handle errors.  They included Non-Reward Markers, Time-Outs and Least Reinforcing Stimulus.  He is not a fan of non-reward markers (NRM) because he feels it can be a punisher unless used very skillfully and can easily cause frustration for the dog.  He feels most people do not have the skills to use it effectively.  He feels that time-outs should mainly only be used when the dog is giving a human a time-out.   If the dog is ignoring us then we should remove the opportunity for reinforcement.  Time-outs can also easily punish the wrong behaviour if not timed properly and are ineffective if the animal doesn't care about your presence.  He noted that ending a session for a break or to reduce frustration is not a time-out, it is a managment technique.

The one I found interesting was Least Reinforcing Stimulus.  I find all this jargon confusing at times but basically when the dog gives us the wrong response (or no response) we provide a neutral response (ie don't move, make noise, change facial expression etc) for a period of 1-3 seconds and then offer the dog an immediate, easy opportunity for new reinforcement.  The dog should have a calm response to your neutral response.  It is designed to cause the least amount of frustration for the animal.  This is not really a technique for teaching new behaviour it is only a response when a behaviour is learned and is not done correctly.   He showed the technique working very well with both marine animals and his own dogs.  Many positive trainers already utilize this technique even if they are not aware of the science or terminology.

A real life example of how this works for me....
When I release my dogs to explore off leash I require a sit while I remove the leash and a release word (go see) from me before they move.  Riley pretty much has this understood so often is released first.  Stella is fascinated with what Riley is doing and therefore isn't all that keen to sit and wait.  Previously I would ask for a sit and if she didn't offer then I would touch her collar (basically an alternate cue for the same asked behaviour).  If that didn't work then I would move her further back from what she wanted, try again until I finally got what I wanted.  It worked but we both found it frustrating and I felt I was re-cueing much to often.  It also was not teaching a fast response.  Yesterday when she didn't want to sit I did my "pause" and then asked for two hand-touches which she did and then asked her to sit and she sat super fast.  I was then able to reinforce that by releasing her to play.

Another example is that I have been making the dogs "work" for their dinner when I have time.  With Riley this means I run through his list of "obedience" commands and feed him a spoonful of dinner when he is right.  Previously if I got a wrong response I would often "fix" the response and then just reward with a "good" and a pat.  That basically teaches him that I will "fix" his response (tell him to get in closer etc.) instead of him learning to think through what the correct response is.  Yesterday he sat too far back in heel and I just moved forward and asked for a touch, then a down (both reinforced) and then moved into heel.  Again I didn't get the position I wanted so moved on.  The third time he had beautiful heel position and also the next two times I asked.

I know it is a very simple thing and probably has been very obvious to many others but it as been a bit of a light bulb moment for me.  If I think about it I have used this technique especially when Stella was jumping up to grab at me while we were walking.  I would freeze and she would stop and then we moved forward again.  Dogs also often use this when playing with each other and one dog doesn't like how the other dog acts.  I look forward to experimenting more with it.  Any errors or incorrect interpretations of Ken Ramirez's lecture are entirely my fault!

In other news Stella turned eight months old January 31.  Where does the time go? 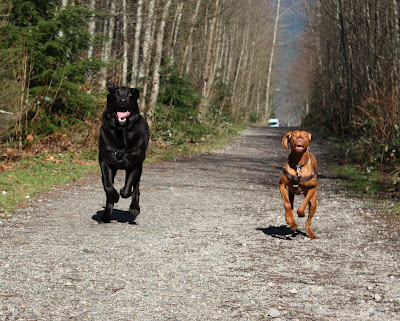 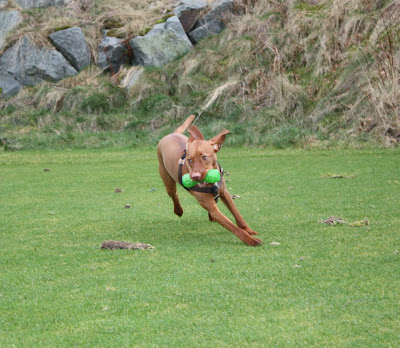